We are very proud to celebrate our 20th anniversary this year!

20 years in the life of a company is a symbol of success, resilience and Agility!

To mark this important milestone, we are proud to unveil our anniversary logo! 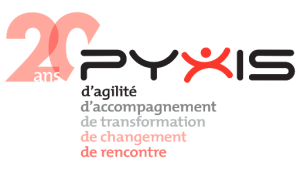 Throughout the year, we will share with you a few pieces of our history, anecdotes and testimonials from people who have shaped and contributed to the success of Pyxis.

More than ever, Pyxis is rooted as a leading player in the Agile community. In the past 20 years, we have trained several Scrum Masters, Product Owners, managers and developers in most Quebec companies as well as helping with organizational and human transformations. Pyxis has even developed applications, because above all, we were a firm of developers! But we’ll talk about that later in our story.

This brand has crossed the oceans from Switzerland, to France, Belgium and even Singapore!

“Twenty years is also the age of maturity, and for a company like Pyxis that’s not insignificant. We have lived and gone through all kinds of adventures, some more pleasant than others, but even against wind and tide, we have stayed the course. And as if we needed to remind everyone, the crisis we are currently going through is a testament to our resilience and our ability to overcome many challenges”.  Martin Landreville, President of Pyxis and Done.

Without your contribution and your work, Pyxis would not enjoy the notoriety it has today.

This is why we would like to invite you throughout the year to celebrate Pyxis’ 20th anniversary in style!

Story of Pyxis: 2005 to 2010 – Pyxis Technologies takes the turn to Agile software development

Pyxis, 2000 to 2005 – Developing software differently and friendship as a starting point